First Time with The Boys 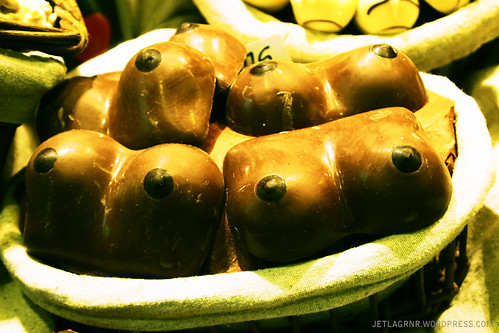 On Friday, May 16, first-wave U.K. punkmeisters The Boys will be headlining day two of HoZac Records‘ three-day Blackout festival in Chicago. Crazily, this will mark their fourth U.S. performance since the 1977 release of their glorious first single “I Don’t Care,” and I’m slightly devastated I won’t be there. Sure, I’ve seen them before—twice, even, thanks to the Holidays in the Sun festivals (now the Rebellion Festivals)—but that was over a decade ago, both times in echoey, cavernous venues, quite unlike the intimate Empty Bottle in which they’ll be playing in the next 60 hours.

Had I continued to make my zine, perhaps I would possess better recollections than I do now. As it stands, I remember my first time with The Boys a bit more clearly than the second. It was in 2000 at the three-day Holidays in the Sun fest in Bergara, a Spanish Basque town numbering 11,000 or so citizens that, amazingly, had a dedicated rock venue called Sala Jam. (Coincidentally, it was festooned with posters promoting a show with NYC legends The Dictators, who are also playing this year’s Blackout.) I loved the historic quarter and the friendly locals, who got a kick out of a red-haired Asian girl chirping Basque phrases at them. They were pretty chill with all the punks and skinheads that mobbed their otherwise sleepy streets, too. Judging by the broken toilet tank covers after the first day, I’m sure little sleep was had by festgoers that weekend. The Boys’ performance itself was a singalong pogo party.

Perhaps my memories from that encounter are sharper since my senses were heightened after a would-be mugging incident in Bilbao a day earlier (luckily, the purple grip marks on my arm that I received while fending off my traveling companion’s attacker faded a week later). It helps that I have terrible photos (some taken with my tetraptych-producing Nickelodeon PhotoBlaster) and a fuzzy recording of a brief interview I nabbed with Matt Dangerfield and Honest John Plain. Among the hard-hitting topics tackled: their first time, and the accompanying soundtrack (if any).

Matt: “It was done in complete silence, I think. Well, not complete silence, but there was no music playing. For me it was a drunken fumble.”
Honest John: “Beatles, Stones, Bob Dylan.”
Matt: “What? You were listening to three albums when you were doing it for the first time?”
Honest John: “Well, I took a long time….No, I think my mum! My mother downstairs saying, ‘What are you doing up there, John? Whaddya want from the fish shop?’ I’m afraid that was it. I didn’t have music on at the time.”

It pains me that I won’t be seeing them again, so I hope you go and report back! 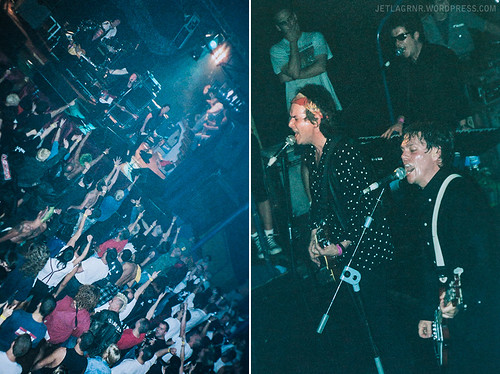 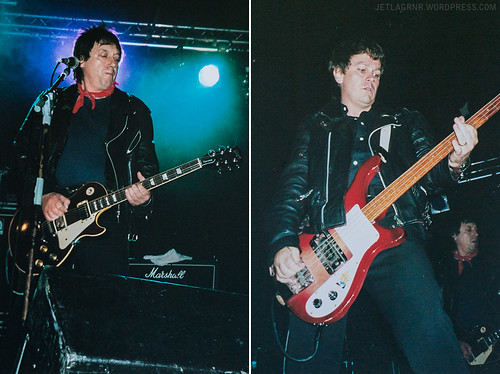 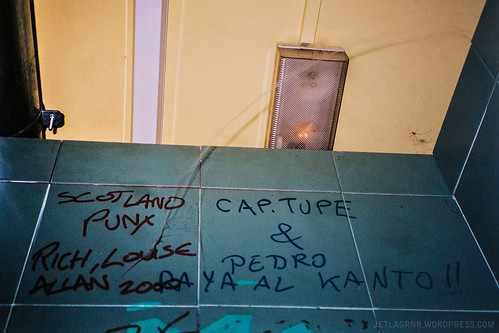 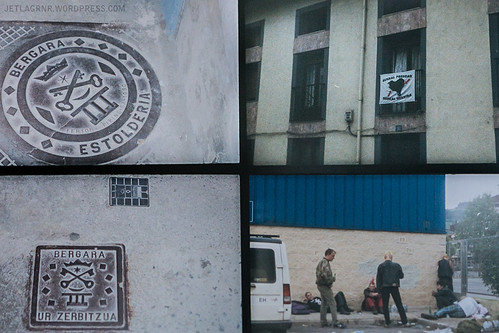 One year ago today, C + I were burning out the soles of our shoes in Barcelona, the first stop in a five-city trip around Spain. Had we not left the city a few days before it suffered its worst snowstorm in 25 years, today’s post might’ve featured something other than food. But we did, and it won’t. In fond remembrance, here’s a brief survey of the more-photogenic morning repasts we had during our snow-free adventure.

As you may know, European breakfasts aren’t an extravagant affair. Most natives grab café con leche (espresso with milk), maybe a doughy snack (churros, rolls), and hold out for a big gastronomic blowout at lunch. My delicate machine required surprisingly more fuel than that for our lengthy expeditions around town. Fortunately, I was usually able to make do with savory bocadillos (baguette sandwiches filled with omelet, sausage, cheese, etc.), sweet hot chocolate so thick it needed to be eaten with a spoon, or flaky powdered pastries. Sometimes I had them all in one sitting.

We ventured into Barcelona’s Mercat de la Boqueria one morning, hoping to remedy the dearth of fresh (that is, not fried or drenched in oil) fruits and vegetables in our Spanish diet. I bought strawberry-coconut juice from the first stand I saw, partly because the technicolor straws and signage screamed “Photograph me!” and partly because I thought the mean-looking vendor might yell at me if I took a photo of her goods without buying anything. I thought I sensed an unspoken agreement between us when money exchanged hands–hey, she smiled!–and felt free to snap a photo shortly after. She yelled at me anyway and I scampered off, fearing reprisal from her broom.

I quickly discovered that hers was not the only juice stand at the market, and she was not the only one flaunting colorful straws. In fact, since she was situated right at the entrance, she charged more than the others for juice that was probably out of a can. I guess the lesson here is to not be enchanted by the first set of flashy doodads you see. Oh, and, if you’re in a non-English-speaking destination, beware anything signed in English. These are things I’ve know for a long time but, for some reason, juice caught me off guard. Can I blame it on jetlag?