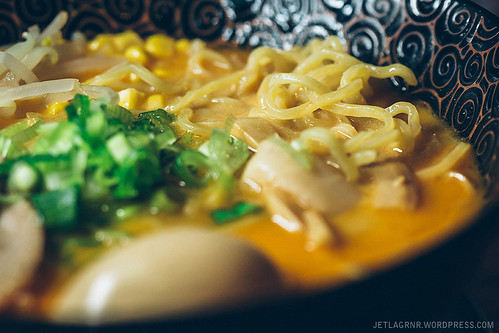 Back in 2011, I recounted my childhood love of instant noodles and the subsequent mind explosion that occurred when I discovered that ramen could be ordered in a restaurant. Since then, ramen has been enjoying a renaissance in the Bay Area, and I recently slurped my way through a few bowls in the East Bay and San Francisco for a piece on The Bold Italic. Here’s the full gallery of goodness I tackled with the help of a few intrepid friends. What are some of your favorite spots in your neck of the woods? 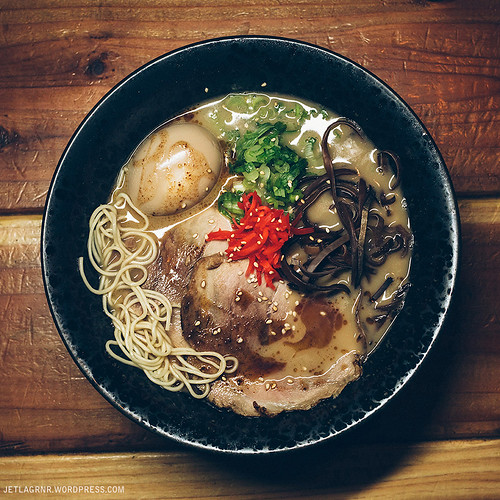 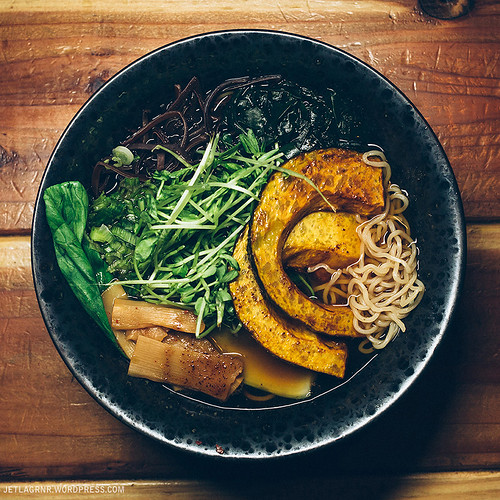 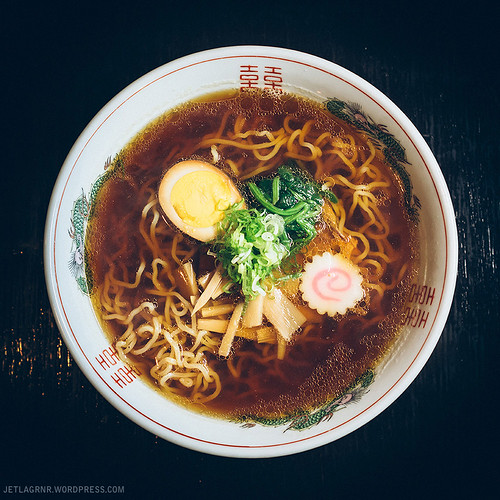 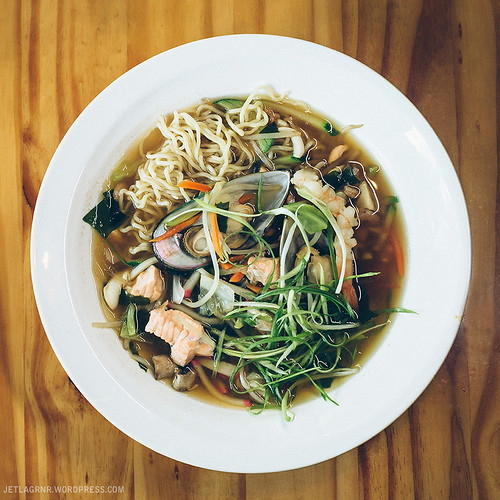 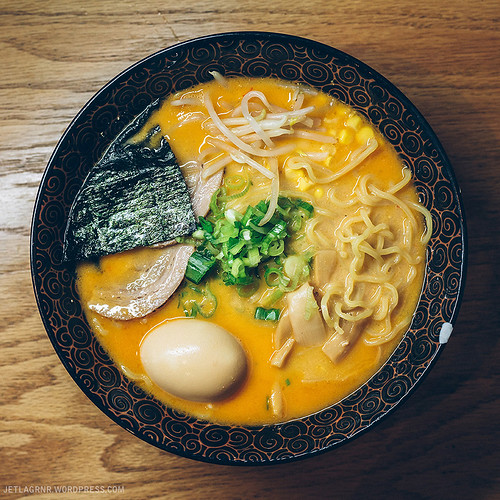 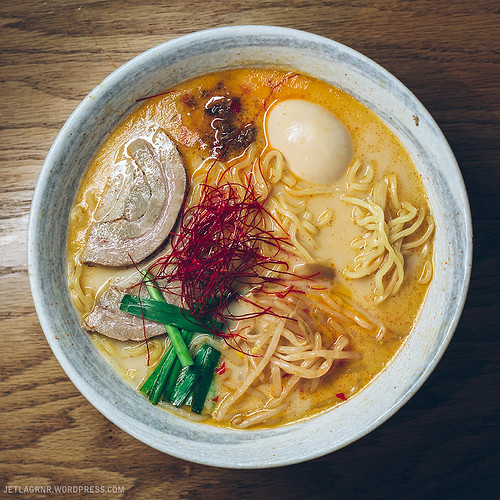 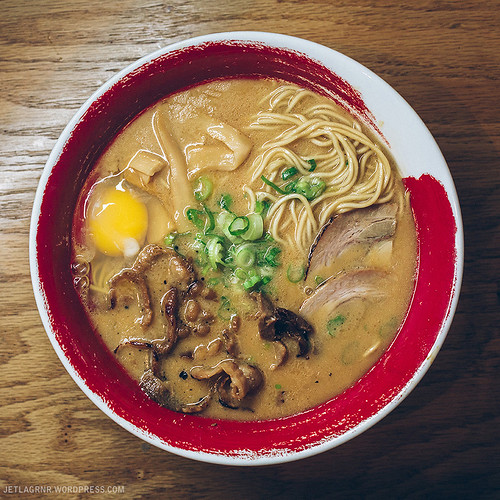 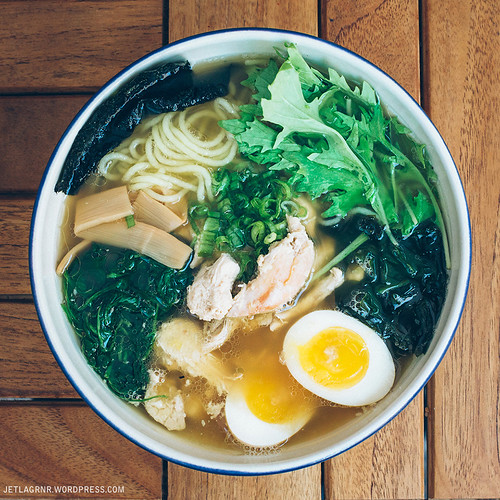 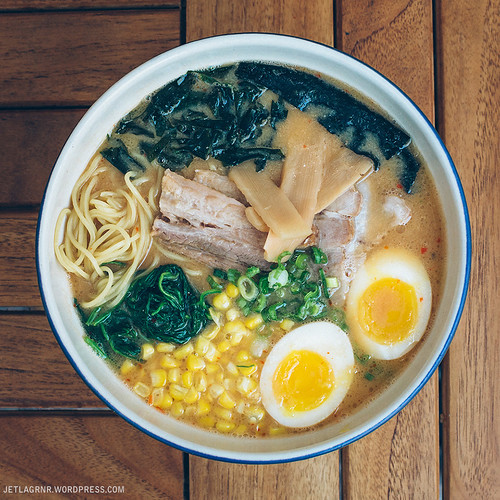 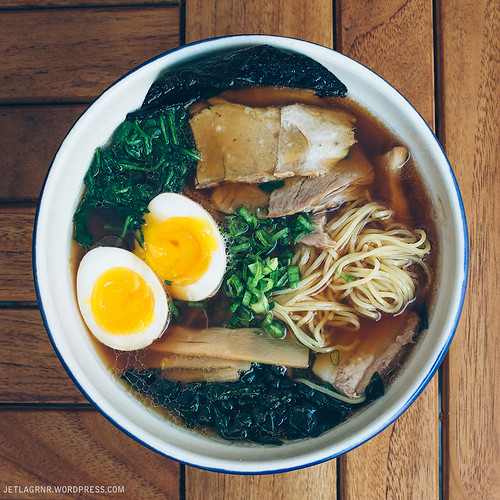 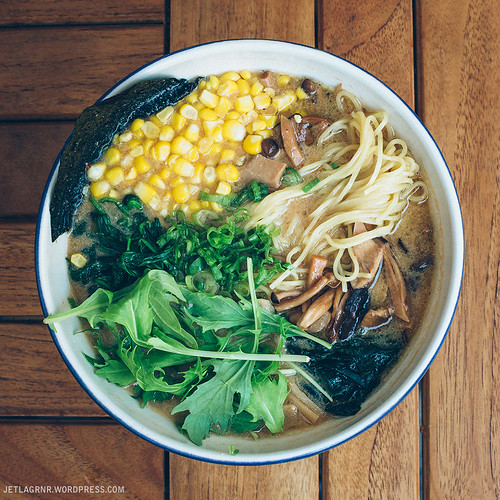 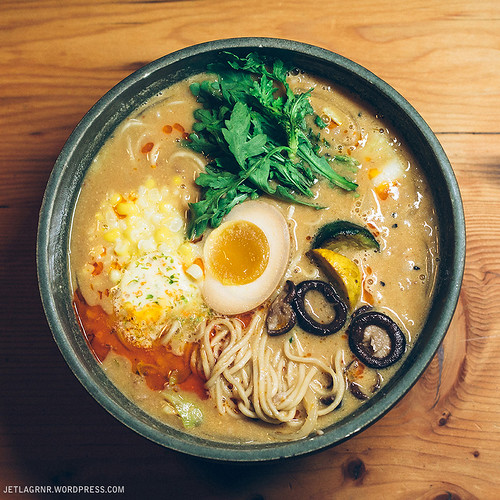 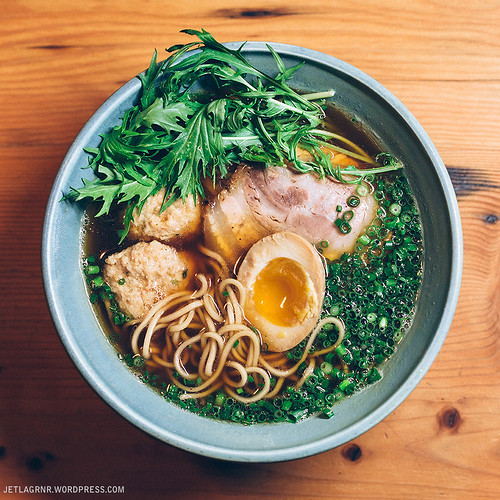 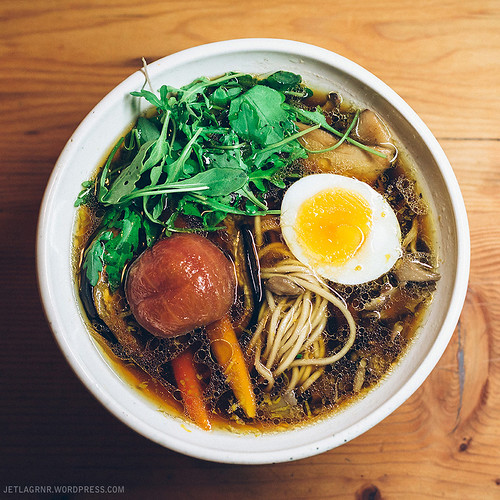 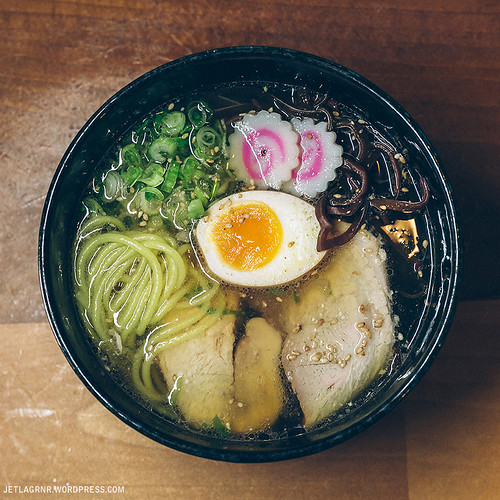 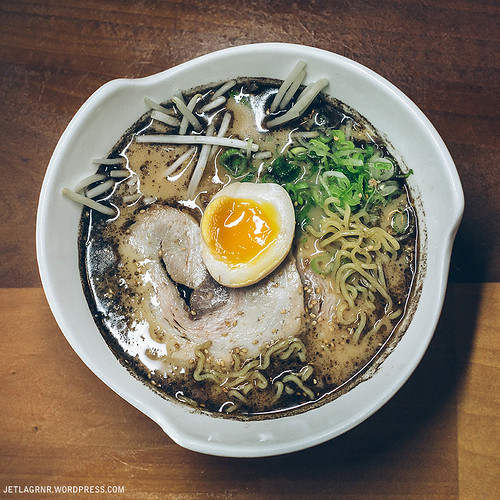 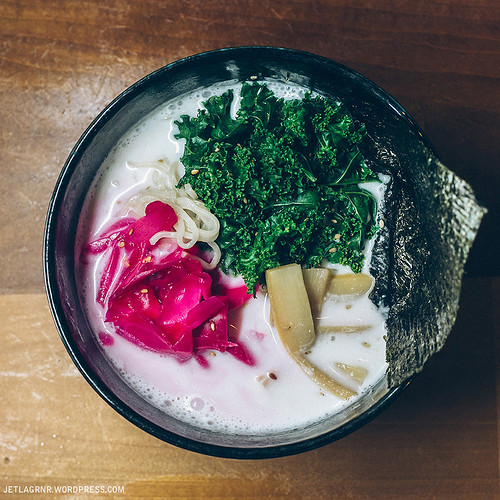 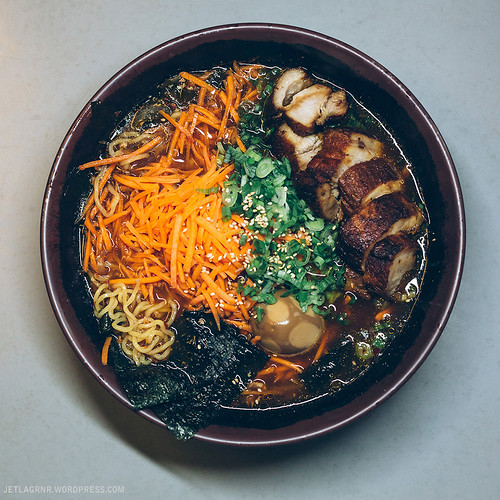 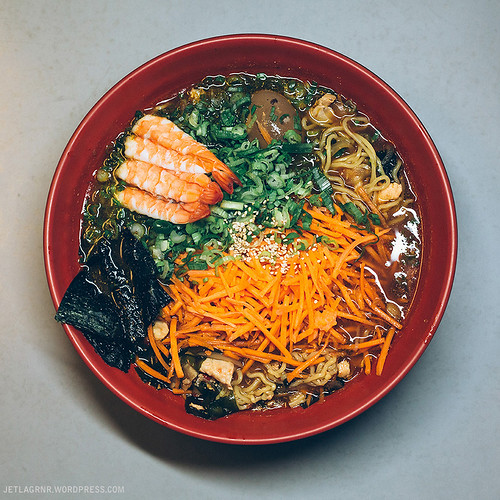 When I was in Sebastopol in September, I had the misfortune of picking up the debut issue of Lucky Peach, a quarterly food journal spearheaded by chef David Chang (owner of NYC’s Momofuku restaurants), writer Peter Meehan, and the Anthony Bourdain: No Reservations production team. I say “misfortune” not because it’s a waste of a perfectly good tree but because it renewed my appreciation for ramen. But I suppose it would’ve been a failure on its end had it not, seeing as the whole issue centers around the humble, chewy foodstuff that sustained me for a good three-quarters of my life.

Kraft macaroni and cheese may have been popular in Western households, but instant ramen was a staple in our Taiwanese-American home. The Tung-I brand (the Chinese onion flavor in particular) was our favorite, with its brick of crispy, wavy noodles, foil packet of dry seasoning (MSG, dehydrated chives), and clear packet of fragrant, partially solidified oil and fried shallots.

We never ate it for dinner (somehow my mom always managed to whip up a soup, a protein, and several plates of greens and vegetables each night), but we devoured it as a snack. Occasionally we had it ungarnished, but most of the time we’d crack in an egg or two and/or toss in some fresh spinach. My dad would drop in dollops of chili paste until the broth was an unseemly red. I was probably 10 when I started making it on my own. Unsurprisingly, I packed a big box of it and an electric kettle when I moved 500 miles away to college.

Of course, my family also had a variety of Nissin Cup Noodles on hand for the times when we were either too busy or lazy to deal with a pot and a bowl. Even though I haven’t touched the stuff since the 1990s, I still remember the treats found within each cup, more so than I remember the various shaped marshmallows found in Lucky Charms cereal: spongy, yellow cubes of egg; small pink curls of shrimp with black intestinal tract intact; sweet orange tabs of carrot; green balls that never seemed to properly reconstitute into peas.

Eventually, once I was on my own and paying for stuff with my own money, Top Ramen and Maruchan (inferior brands, in my opinion, because they lacked oil packets) caught my attention with their 20-for-$1 sales. When I was feeling adventurous, I’d splurge on Shin Ramyun, a spicy Korean brand. I stopped eating instant ramen completely when I started reading nutrition labels and learned, to my horror, that each pack was 400 calories and 24 grams of fat.

I was long out of college when I discovered that cooked ramen existed in a commercial setting. A non-Asian friend introduced me to the handmade gook-soo noodles (similar to udon) at Bear’s Ramen House, a Korean hole in the wall in Berkeley’s Asian food ghetto. They also served ramyeon, but I didn’t see the point of paying $5 for something that I could literally get for a dime. Eventually, I ate my first bowl of restaurant ramen there. Even though they used dried instant noodles, the broth and accompaniments blew away my home attempts.

It wasn’t until years later in 2009, on my second trip to Tokyo, that I finally had fresh ramen. In Japan, ramen is considered fast food, and it’s as ubiquitous as burgers, sandwiches, and pizza by the slice in the States. Whole eateries (called ramenya) are dedicated to the stuff, and they’re not shy about showcasing their offerings, either through photos or plastic replicas so well done that you can almost see the steam wafting off the vinyl chloride noodles.

Ironically, I ordered my first bowl of fresh ramen from a vending machine. Many ramenya prefer an automated system in which you choose what you want from a machine outside, insert your money, and take the ticket it spits out to the person at the counter inside. I liked it because I didn’t have to struggle with the language and could take my time marveling over the menu.

My meal looked just like the replica, and the noodles were chewy, savory, and comforting, with a bite that instant noodles never had. How had my parents kept this from me for so long? Were they even aware of this magic in a bowl?

Little did I know that ramen had many more dimensions, as illustrated in Lucky Peach. The noodles could be curly or straight; the broth clear or milky, fishy or porky or both; the eggs soft-boiled, hard-boiled, or raw. And then there were the various combinations of toppings: green onion, seaweed, fishcake, pork, corn, spinach, bean sprouts. When I went back to Tokyo this past Thanksgiving, I made sure to squeeze in a few more bowls.

My ramen journey didn’t end there, however. Somehow during the course of writing this post, I became mildly obsessed with instant noodles and learned that they were invented by Taiwanese-born Momofuku Ando for Japan’s Nissin Foods. (I assume David Chang borrowed Ando’s name for his restaurant.) I also developed an unexpected longing for the Tung-I ramen of my youth.

I bought two packs at the Asian supermarket and saw that the packaging had changed a bit (“Unif” had been added to the name; the flavor was now simply “onion flavor”; instructions were also provided in German and Norwegian). In addition, the product was now made in Vietnam. Yikes! Did they change the recipe, too?

Curious as I was, it took me a good two weeks to work up the courage to prepare one pack. Yes, I know that makes me sound like the biggest food snob, but not only was the fat/calorie content daunting, so were the ingredients. MSG was one thing, but what were disodium inosinate, disodium guanylate, and tertiary butylhydroquinone?

As it turned out, the ramen smelled and tasted exactly like I remembered, from the heavenly scalliony oil to the dried chives to the spirals of noodle. I ended up eating both packs with minimal guilt, knowing that I’d never knowingly eat instant ramen again.

Fresh ramen, on the other hand, is a completely different beast. And what about cup noodles…? Oh, why did I dare to eat this particular peach?