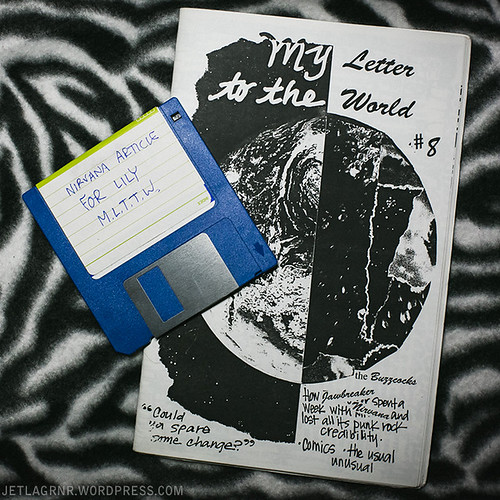 My Letter to the World #8, with Blake Schwarzenbach’s floppy disk

In February 1993, Lookout Record darlings Green Day caused an uproar among punk circles when they confirmed that they’d be signing to a major label. For some, the 1994 release of Dookie on Reprise Records meant the beginning of the end of punk rock, and likely helped groups like the Offspring and Rancid find mainstream success despite their indie status at the time.

The same year that Green Day contended with accusations of selling out, San Francisco band Jawbreaker agreed to join Nirvana for six shows during their In Utero tour. Twenty years later, it seems like no big deal, but this embittered a huge clutch of their fans. As I mentioned in a post I wrote last year, I asked singer/guitarist Blake Schwarzenbach to keep a tour diary and let me publish it in my zine My Letter to the World. He handed it over to me on a floppy disk (remember those?) a few weeks after Jawbreaker returned and that issue came out on December 16, 1993. Less than four months later, Kurt Cobain was found dead in his Seattle home.

My world was microscopic in the 1990s so I actually remember where I was when Kurt’s death (and Joey Ramone’s on April 15, 2001, for that matter) was officially announced in the media: at KALX. I had finished up the 9:30am-12pm slot (playlist below) and was putting away my records when a listener called in with the news. (This was before the ubiquity of the World Wide Web, and still a time when breaking news was attained only via TV or radio.) DJ Mickey took the call and informed the KALX listeners.

It’s always sad when someone passes away, especially when it’s believed to be by his own hand. However, I can’t say I was devastated by his death, even though both Bleach and Nevermind were integral parts of my mid-to-late teenhood. Hearing songs from either album still reminds me of the bleakest, most miserable points of my life to date (which I realize is absolutely fitting and the reason to this day I can’t bear to listen to Nirvana), so perhaps I appreciate the relief he achieved through death.

Getting back to Jawbreaker, Blake stated in his piece, “It has been my official platform since last year (when major labels began expressing an interest in us—oh, those foolish magnates!) to never sign to a major label. I stand firmer in this belief today than ever….” As it turns out, they’d sign to DGC Records in 1995 and release Dear You before breaking up in 1996. Here’s the tour diary in its entirety (click images for a larger view) as well as my playlist from that fateful day in April. 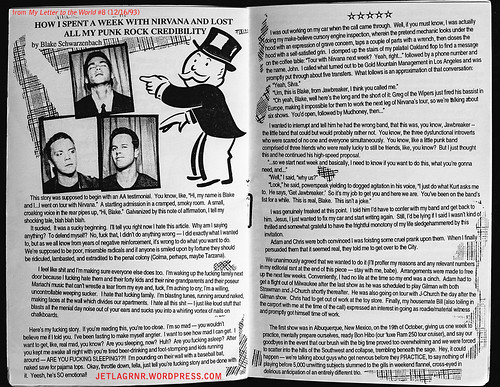 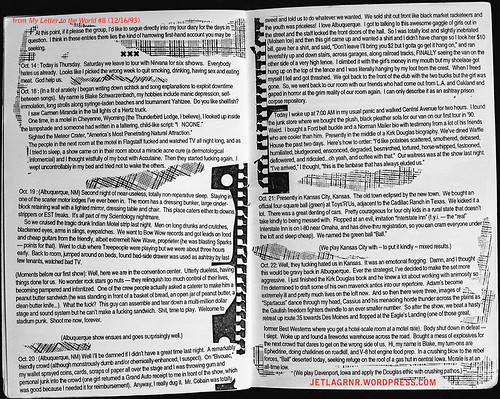 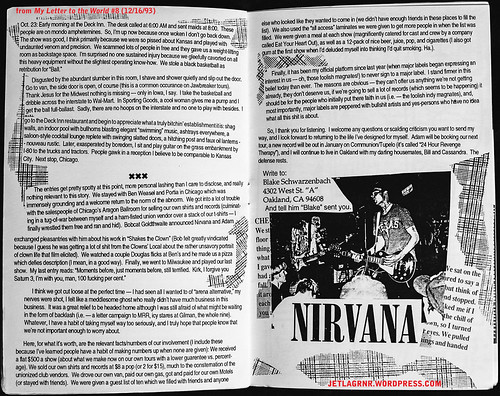